Fencing a wildlife conservancy presents many challenges. A fence must provide endangered species with protection from poachers, and keep predators from attacking the livestock of surrounding communities. However, migratory species such as elephant and wild dog must be able to move out of Ol Pejeta into the greater Laikipia ecosystem.

Ol Pejeta maintains a 120 km electric fence. The fence is solar powered, with over 14 solar stations located strategically along it, that power the fence and monitor voltage. Any surge in power, day or night, is traced and rectified immediately. The entire length of the fence is patrolled by Ol Pejeta rangers on a daily basis, and any issues reported to the maintenance team.

The challenge of allowing migratory species the freedom to move in and out of the Conservancy, while keeping rhino in, has been solved by innovative ‘gaps’ at strategic points along Ol Pejeta’s perimeter. These gaps are simply a series of short fence-posts erected three feet above ground, spaced around 22 inches apart. The rhino’s large toes and girth prevent them from being able to pass through the spaces between the posts, while all other animals can easily fit through. There are also large piles of stones placed a meter after the posts, which makes the gap appear barricaded to a short-sighted rhino. 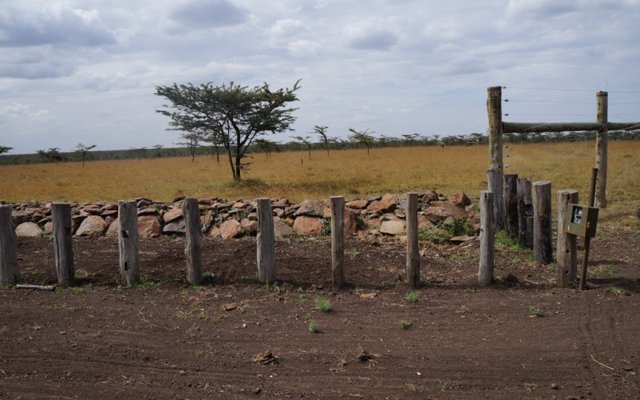 The gaps in the wooden posts allow every animal - except for rhinos - to pass over or through. The stone wall presents an optical illusion for rhinos, who see it as impassable.

The gaps have automatic, infra-red trap cameras that take still images of anything that crosses, and are monitored by Ol Pejeta rangers.